Nearly 88,000 racist incidents were recorded in Britain’s schools between2007 and 2011, the BBC has found.Data from 90 areas showed 87,915 cases of racist bullying, which includedname calling and physical abuse.Sarah Soyei, of Show Racism the Red Card, has described the figures as the”tip of the iceberg”.Schoolgirl Khadeja Fahat said the daily abuse she suffered had a massive impact on both her mental health and her education.http://www.bbc.co.uk/news/uk-18171129 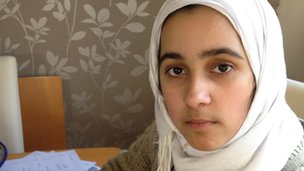 Khadeja is one of a growing number of pupils to have faced racist abuse
http://www.bbc.co.uk/news/uk-18171129
This entry was posted in News/Events. Bookmark the permalink.