We are introducing a new programme of Show Racism the Red Card (SRTRC).  It is called Player Ambassadors.  It will involve visits to schools, clubs and youth services by a panel of Player Ambassadors on behalf of SRTRC.Our Ambassadors first activity was the SRTRC Creative Competition awards.  Over the next weeks, we will feature a profile on each of our Ambassadors.  First up, we speak to our Ambassador from boxing, Oisin Fagan.  Oisin has been described by legendary world boxing champion George Foreman as ‘one tough cookie’. 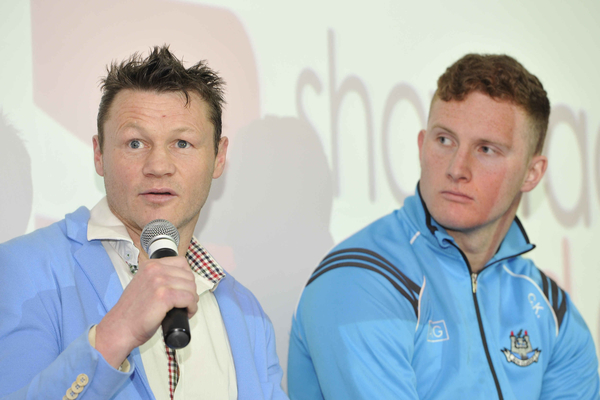 Pictured: Oisin Fagan and Dublin footballer Ciaran Kilkenny speaking during a Questions & Answers session at the Show Racism the Red Card Creative Competition awardsTell us a little about your background …I’m from Tallaght, originally, but moved to Portmarnock, when I was 12, as my dad got a job at the airport. I spent most of my childhood playing football- mostly Gaelic football and hurling, for St Kevin’s, Kilnamanagh, where our team won a few finals in Croke Park, in the underage years, but I focussed more on soccer, after moving to Portmarnock. I’d a short-spell playing ball with Glebe North  and St Malachy’s, but on the strength of a really good season; resulting, in playing, at Tolka Park, in the Junior Cup Final, with my local side, Portmarnock AFC, against Cherry Orchard; I was offered a full-soccer-scholarship to Oklahoma, USA, in 1998.10-years later; between, doing well in my studies; acquiring, honour’s degrees, in Political Journalism and Physical Education, I  became a schoolteacher- teaching primary school kids by day, coupled with work, as a professional boxer- fighting rough and ready lads, by night before moving back to Ireland in 2009 to work with Irish Amateur Boxing Association. 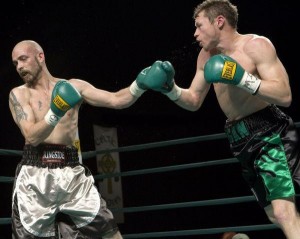 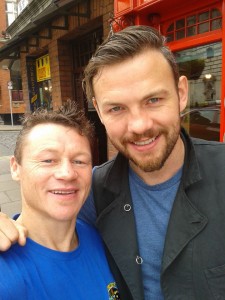 Pictured: Oisin with his friend Andy LeeWhy is the anti-racism message important to you?Basically, my parents, Sean and Lily, brought me up to respect everyone and therefore, I am the product of a good environment, in that respect. I believe that my folks were a little ahead of their time, as it’s only been in the last 15-years-or-so that immigrants have been coming to Ireland, in large numbers; however, I’ve had friends from different backgrounds from a very young age. My parents were smart and open-minded; always, took the side of the under-dog. They helped me to become quite a well-rounded-individual. I’m extremely easy-going in one sense, but there are a couple of issues that push my buttons to the limit- racism being one of them.Reading about our own history, such as Bloody Sunday and other similar events in the North, prompted my initial interest, in egalitarian-type-politics and I guess following on from that, I started to read-up, on how badly the blacks were treated in the US, or the troubles that Asians, Irish and blacks, were accustomed to, in Britain; which, in-essence, was my first, real understanding of bigotry.I was that much anti-racist and anti-bullying that I struggled with this topic and confided in one of the political science college professors, Dr. Dan Savage, about these issues, but he just reinforced my judgement, by relaying that, “one must be intolerant of intolerant-people.” This, initially sounded, somewhat of an oxymoron, but on further examination, I started to realise that this was the essence of equality after all, and thus, I’ve held his advice, with deep appreciation, ever since.You spent 10 years in the US- how is it to be an immigrant from Ireland in another country, do people have good or bad views of the Irish?To be fair, I actually had really good experiences.  I didn’t personally have many derogatory experiences of bias directed at me, apart from the odd, “You Irish are always fighting and drinking” comments; however, as I was on a football scholarship, and there were about 14-different nationalities on my team, some of them, certainly had more blatant racism directed at them, by the locals. 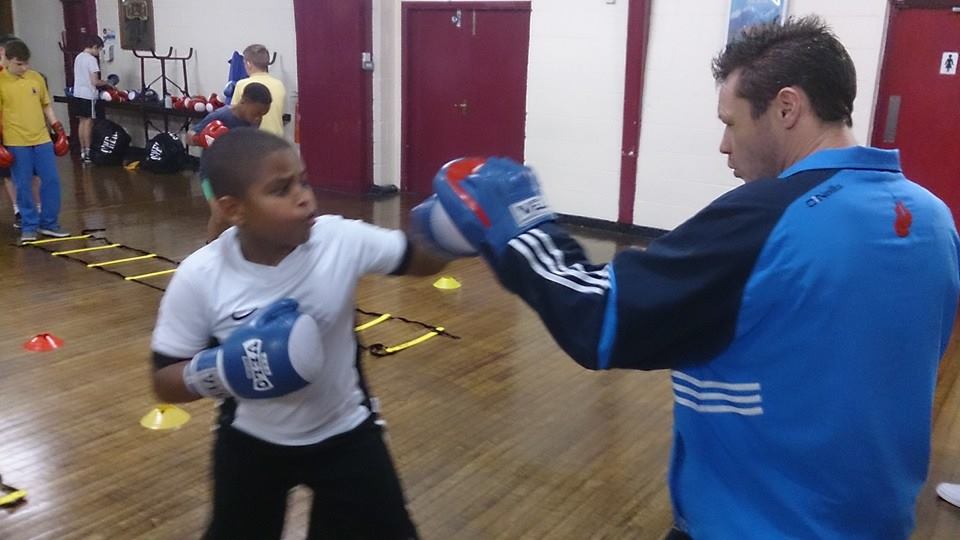 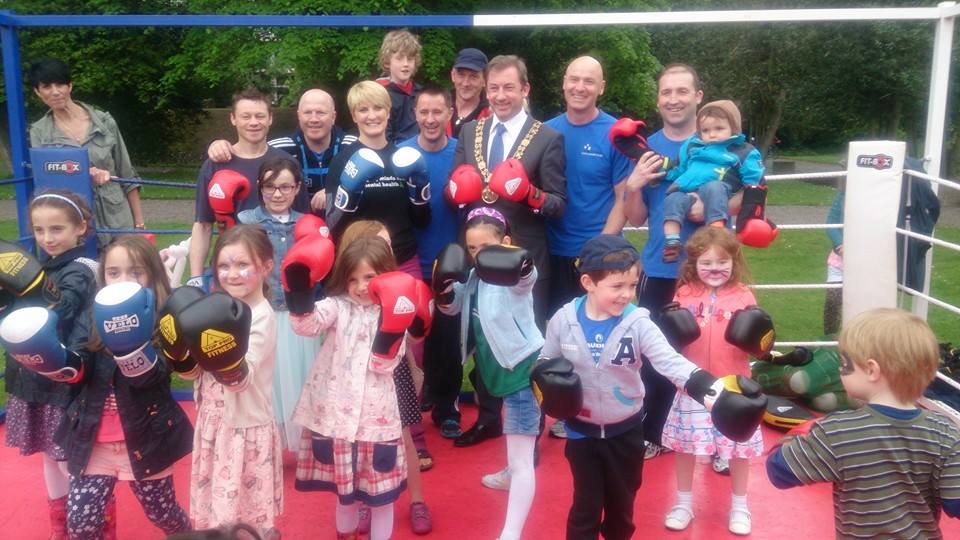 Pictured: Oisin in his day job as Boxing Development Officer with IABA and supported by Dublin City CouncilIs racism an issue in boxing? There’s certainly racism directed towards the Traveller Community here in Ireland- no doubts about that. I don’t know what it stems from. There are some excellent boxers out of the Travelling Community and they should be fostered, to achieve at the highest level. A good friend of mine, Andy Lee, a former Olympian, became the first Traveller to win a world title, only a few weeks ago, so that’s surely the start of many more ‘feel-good stories’ from this group, as many of them are very gifted athletes and like everyone else, just need a nudge in the right-direction, to achieve greatness.In my opinion, no ethnicity is privy to being better at one thing, over another, however when I was a schoolteacher and teaching kids at Columbus Elementary School, in Oklahoma City, for the 5-years, after I graduated from college, some of the children used to want to ‘make-it-out’ that the Mexicans were the best boxers.   I told my story as an example. I hadn’t started boxing until I was 30 years old, when many fighters have already retired. So I shouldn’t have had a very successful career; however,  I was particularly tough and trained my heart out- putting in every bit of energy into being the very best I could be. I managed to beat many, many fighters that had been boxing all their lives; not-to-mention, many fighters I wasn’t supposed to beat and I ended up winning championship titles on two continents, which was surely, against all-odds. US Network TV feature of Oisin and teachingUS Network TV feature of Oisin and boxing US Network TV feature of Oisin and teaching 2US Network TV feature on Oisin winning the Irish titleShow Racism the Red Card AmbassadorFormer Irish and North American State Boxing ChampionIABA and DCC Boxing Development Officer 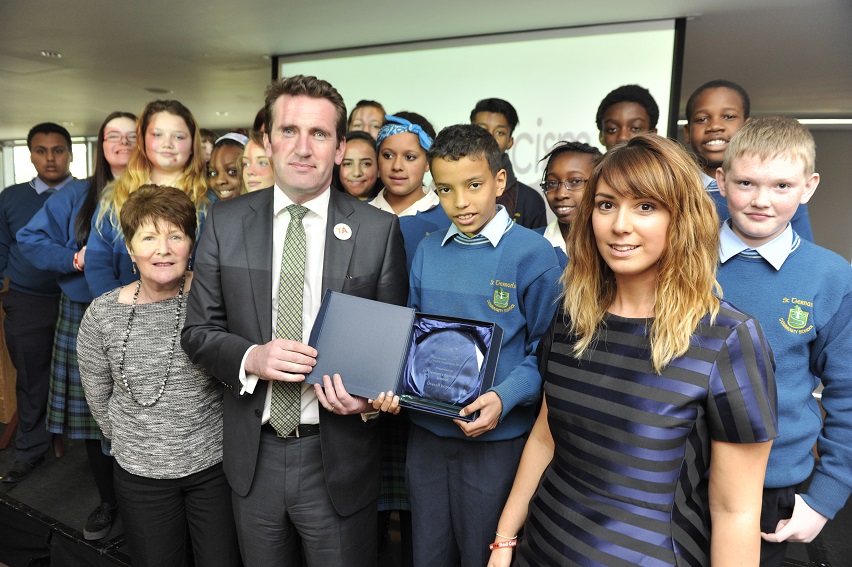 Pictured: Minister Aodhán Ó Riordáin TD with Ms Brett and students from St Tiernans Community School at the Show Racism the Red Card AwardsEntries to the SRTRC Creative Competition can be viewed here A full report from the event can be viewed here