Tackling Racism in Ireland and in Europe

Show Racism the Red Card hosted the first meeting of an Erasmus Plus funded Strategic Partnership involving partners and friends in Denmark, Finland, Netherlands, Northern Ireland and the United Kingdom. 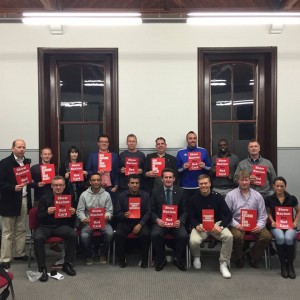 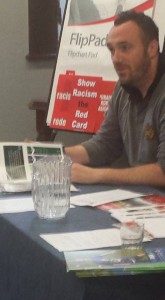 Minister for New Communities, Equality and Culture Aodhán Ó Riordáin TD  spoke to our international guests and participated in a discussion about challenges of tackling racism in Ireland and Europe.Our public seminar involved participants including teachers, principals, youth workers and sport in a discussion on tackling racism. Sunil Patel from Wales explained how the Show Racism the Red Card project works.  His team include education workers and ex professionals including Leroy Rosenior who visit schools to deliver coaching and education workshops. They also deliver teacher training, as do SRTRC throughout the UK.  In all their work, they incorporate evaluation.  Before the workshops it was learned that surprisingly large numbers of children thought it was ok to use terms like N***er, Paki and Chinky.  At the same time, there is anxiety within the teaching profession about tackling racism.He cited an example of a primary school pupil named Hannah, who was experiencing terrible racist abuse at school.  Her mother phoned Show Racism the Red Card office.  When the school was contacted, the principal initially was hesitant and reluctant and even denied there were racist incidence.  However, once the school was reassured that the project was here to help, they welcomed the project into the school to do the workshops.  At the end of the workshop, on their own initiative, two of the pupils who were giving racist abuse to Hannah apologised for the hurt they caused.Kay Mc Cabe from Involve Youth service spoke of their involvement with SRTRC.  80% of the young people using the service are from traveller backgrounds.  The youth service engages with young people every week and each year, the SRTRC Creative Competition is one of their programmes. One of the impressive aspects of their competition entry this year was how they engaged local politicians and others to support their message of making a stand against racism.The video entry from Involve Youth Service and Douglas Community School were shown to illustrate the creativity of different groups in how they develop their anti racism messages.https://www.youtube.com/watch?v=biRVB-7EEew https://www.youtube.com/watch?v=jMIYK-ZPt9MIn the afternoon, we had presentations from Des Tomlinson (FAI Intercultural Co-ordinator) and Michael Boyd (Irish FA Director of Football) and Simon Christensen (Danish Players Union Social Responsibility).  While sport is widely acknowledged as a vehicle for bringing people together, it can also be tool for division.  We all have to work carefully to create a safe environment to build for the future.Michael Boyd said that in 2000, the average attendance at Northern Ireland international matches was 4,000 and the environment was not safe for many people.  As the Community Relations manager, he engaged with supporters first and then other stakeholders to develop a strategy for increasing participation.  The supporter led strategy has seen a greening of flags at matches, instead of Union Jacks while the IFA recently launched its Youth Development strategy.  Part of this strategy is the anti-racism and anti-sectarianism work of the IFA. Recently SRTRC and IFA have agreed a working partnership, which we expect to yield great results over the next years.Simon Christensen of the Danish Players Union explained how some of the professional players in their association are also signed up as SRTRC ambassadors. 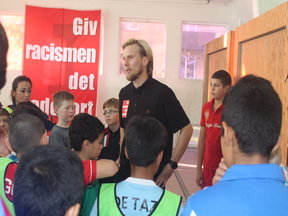 More information is on their website-http://www.stopracismen.dk/Ged Grebby (Chief Executive of SRTRC UK) said:   “At a time when the far right are calling for a “closure of all boarders” after the horrendous events in Paris last week: it is vital that anti-racism knows no borders. 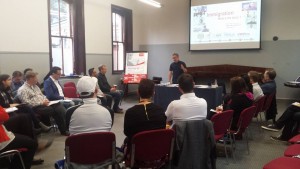