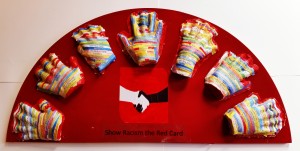 The Programme was completed by Curragh youth project’s second year group the CARLES. The group are aged 14-15 and consist of 3 girls and 4 boys. We ran the programme over 8 weeks, each session lasting an hour.The group’s introduction to the programme started with the dvd and Introduction to racism activities. The response from the activities was positive and raised questions for the group on their thinking of how people were discriminated against and how it did not make sense. The ‘Definition of Racism’ piece got them to think about their idea of what racism is.As the weeks continued, the activities and discussions began to become more in depth. The exercises like the exploring prejudice really got them thinking about stereotyping and its effects on individuals. The walking debate came at a good time as it gave us a good idea on how the programme was influencing them at that moment.Other activities like the ‘Beat The Bully’ was well thought out and after some awkward moments they began to feel comfortable about saying positive things to one another how they felt and a good understanding of how negative comments can affect someone.The art piece was conceived by the group and planned during the 8 weeks with a focus on unity and showing that we are all the same. They planned the casting of their hands and the slogans that they felt were important to the piece, which were taken from throughout the education pack. The art piece was a great opportunity to have an informal discussion around the words they chose and why they chose them. The art piece really finished off the programme in a positive way.Overall the programme was well received and the group participated well. The activities that involved games and the art project were really well received by all the young people. The walking debates and more discussion based activities were a little bit more challenging for some of the group. Overall the group came away with a better understanding of how their actions and treatment of people can have a positive or negative effect on the individual. The programme also highlighted for us different areas of need for future programme work with the group.The submission is a piece of art work that comprises of different materials. First the group made plaster cast of each of their individual and unique hands. Then these casts were carefully covered and glued with strips of coloured paper with words and slogans from throughout the program. They were then mounted on a piece of wood that was painted with red gloss paint. The title and SRTRC logo was then printed and added.The piece is entitled: Show Racism The Red Card