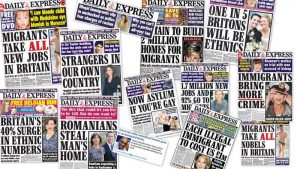 YESTERDAY, I JOINED the team of Show Racism the Red Card UK in a visit to a secondary school in County Durham. In their anti-racism workshops, they ask a question. What percentage of the population in the UK are immigrants?The average answer from the group was 54% and the actual answer is 13%. Such a difference in opinion and facts surely raises questions as to how people have formed their views.Racist attacksViews of immigrants have hardened in recent years and the referendum on the EU has unleashed a wave of racist attacks across the UK. There have been protests outside Mosques and police are investigating who put up signs posted in Cambridge saying ‘Polish vermin not welcome here’.Other incidents reported on Twitter include Polish kids coming home from school on Friday crying and groups ganging up on and taunting children from migrant backgrounds.If there is any doubt as to the level of influence of racism on this referendum, the outcome ofone of Lord Ashcroft’s polls surely clarifies matters. He found that 75-80% of leavers felt that multiculturalism, immigration and liberalism were ‘a force for ill’.Former Conservative Party chair Baroness Warsi described the atmosphere on the streets as ‘not good’. There has even been a hashtag on Twitter to profile post referendum racism – #PostRefRacism.Anti-immigrant sentimentBrexit was driven by anti-immigrant sentiment and fuelled by racism. The vote has been cheered on by Marine Le Pen, Geert Wilders and others of the far right across Europe.Aided by relentless media coverage, people began to blame all of their problems on immigrants. Newspapers such as the Daily Mail, Express and the Sun have been the chief culprits. Day after day for almost twenty years they have had horror and scare stories about migrants and refugees.David Cameron must now recognise that his decision to call this referendum was a mistake and one that could have catastrophic consequences. As it is, he has lost his job and Jeremy Corbyn is under pressure to keep his. But what is most concerning is that there appears to be free reign for race hatred.Unfortunately attention is not focused on the streets or in the schools and certainly not on the children subject to racist abuse. The absence of a plan by Brexiteers has opened up a vacuum which is becoming toxic. Without a clear plan as to what happens next, people are acting out with hatred.Ireland’s future?We would be foolish to underestimate the possibility that racism will take hold in Ireland. Racism has grown in the UK because it has not been challenged, at least not in the course of this referendum.Much of the focus of Ireland’s response to the referendum has been on business relations and the consequences for the economy. However, Ireland is not all that different when it comes to the impact of racism, as the evidence shows. Research by Trinity College Children’s Research Centre found that racism affects children as young as seven. The Teachers Union of Ireland found that 46% of teachers had witnessed racist incidents in the classroom in the month previous to their conference.With increasing reports of racism, many people will want to know what can be done in response.There are genuine fears that people have in regards immigration. It is important to address those fears and not feed them.At the same time, it is vital that in Ireland we are attuned to the challenges of racism and recognise the need to respond. We cannot afford to be complacent and think this is not a challenge for us. This requires investment in anti racism education but also investment in communities to develop cohesion.Through these measures, we can build a better society.Garrett Mullan is the Executive Director of Show Racism the Red Card