Posted on 04/07/2016 by Immigrant Council of Ireland
Show Racism the Red Card Ireland met with international partners as part of an Erasmus + Strategic Partnership programme in Newcastle upon Tyne, England.  It was the second of five international meetings over the course of two years from 2015-2017.  The programme involves us working with partners to deliver anti racism education to teachers and to share and learn from the practice of others. 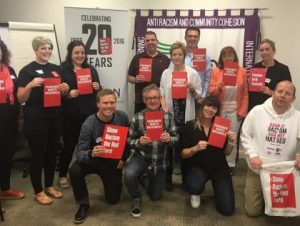 Partners attended from Ireland, Denmark, Finland, Netherlands and the United Kingdom.The aim of the 3 days was to swap good practice between the different projects and take part in a Teacher Training programme. Laura Pidcock and Lizz Bennett ran a 5 hour training session on “How we run our Teacher Training programme in England”.We also had the opportunity to attend Parkside Academy Secondary School in Co Durham and see the staff of Show Racism the Red Card deliver their anti racism workshops and coaching sessions.  This provided us with fascinating insights into how young people engage in anti racism education.At the meeting we had input from ambassadors and supporters as well as partners attending.  Isra Mohammed, Show Racism the Red Cards youngest ever ambassador  spoke on anti-Muslim hatred and how she has been overcoming it in her school in Newcastle.Clare Williams from UNISON Northern Region spoke about the importance of the Trade Union movement in opposing racism.  Clare also demonstrated the strong links between UNISON and Show Racism the Red Card in the North East of England.Tony Higgins from FIFPro (World Players Union) spoke about the important work his union are doing worldwide with SRTRC.  FIFPro  have been instrumental in helping SRtRC set up sister organisations in over 8 European Countries.Ged Grebby said “It was our pleasure to host the second meeting of our 2 year programme.   The timing of the meeting coming after the Brexit vote allowed for a very fruitful discussion on the need for European cooperation to defeat racism and the rise of the far right.  Over our 20 year history we have picked up some great ideas from other European organisations fighting racism and this meeting was again a very productive one”.Garrett Mullan Executive Director of SRtRC Ireland said , ‘This was a great opportunity for our organisations to share ideas as part of a programme of working together.  We learned about anti racism education work in the UK.  We look forward to organising more teacher training days over the next months and then to our next meeting.  Our next meeting will focus on how we engage schools in different countries and how to evaluate our work”Mette Vestergaard Director Players Social Responsibility who run SRtRC Denmark commented on the visit saying  “The meeting with our European colleagues is of great value for the future work on our Show Racism the Red Card campaign. I think it’s really important to share practice on how we best deliver the Anti-Racism message”.

It was a unique opportunity, as the meeting took part in the context of the Brexit referendum and with that, a steep rise in racist attacks.