Get your club involved – Football Against Racism in Europe 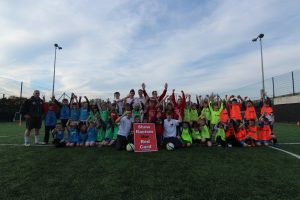 It is FARE fortnight from 6th – 20th October.  FARE is Football Against Racism in Europe. From the grassroots and schools levels to national league, international and Champions League, across UEFA affiliates, action will be taken against racism.What you can do during FARE fortnight:

What we will provide: 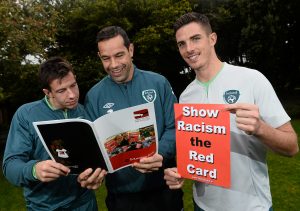 How to get involved:Express an interest using the form on the attachment below and return to info@theredcard.ie or email us with details about your proposed action including the following information-Name of clubcontact name, email and numberYour plan of action: which team involved and what you will doHow you will promote awarenessEstimated number of participantsAge group 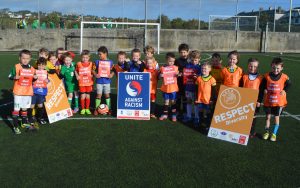 This a link to the Call for Participation letter sent out through the Football Association of Ireland.  Call for participation Football Against Racism Clubs 2016Respond to call for participation by 20th September, so we can send resources for the week prior to 6th October.Migrant Volunteering in SportSeparately, here is a a link to a new publication “Handbook on Volunteering ofMigrants in Sports Clubs and Organisation”.  This publication is in 2parts. The first part gives information to people interested involunteering, while the second part gives information to clubs interestedin attracting/recruiting volunteers from diverse backgrounds.The handbook came about as a result of roundtable discussions, focus groupmeetings with clubs and partner meetings with people from a migrantbackground and NGOs involved in sport across seven EU countries.http://www.fai.ie/sites/default/files/atoms/files/2016%20Migrants%20Booklet.pdf
This entry was posted in FAI. Bookmark the permalink.