In 1992, there were 50 people who applied for asylum in Ireland. In 2001 there were more than 12,000 asylum seekers and today there are just over 6,000. Either way the number of people applying for asylum has increased in the last fifteen years. There are many reasons why but the myths about asylum seekers stop many of us discovering the reasons why people come to Ireland to apply to be a refugee.

Have you heard the following statements? 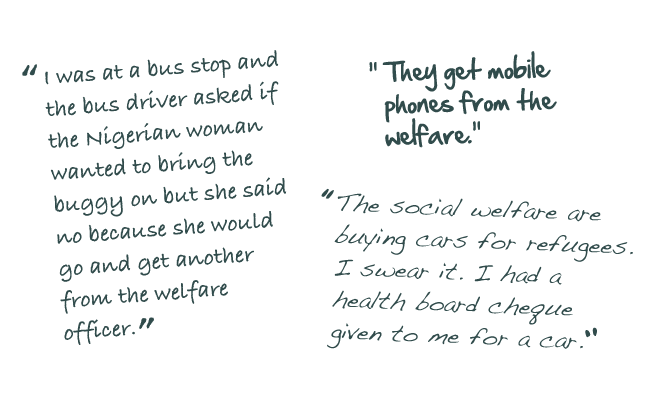 Why people insist on mouthing such untruths will remain a mystery, but what is not a mystery is the difficult conditions people face when they arrive in Ireland to apply for asylum.

People seeking asylum live in what is called ‘Direct Provision’ Accommodation. These accommodation centres provide asylum-seekers with 3-meals a day and a small cash allowance of ?19.10 per adult and ?9.60 per child per week, plus child benefit (this has not changed since November 1999, even though other social welfare benefits have been increased since then). However in 2004, entitlments to child benefit was withdrawn

Asylum seekers can also apply for exceptional needs payments but the payments are discretionary and in recent years, these have been drastically reduced or cut off.

Being confined to designated accommodation centres and dependent on hostel staff has a clear impact on the self-sufficiency of asylum seekers and their ability to regain their independence and autonomy.

The lack of personal space and privacy tends to become a source of friction and contribute to stress and frustration. Financially impeded from accessing suitable private accommodation many asylum seekers have no control over many fundamental aspects of their daily life.

According to the Reception and Integration Agency’s monthly statistics update, as of 30 April 2004, over 50% have been in direct provision for periods ranging from 9-24 months, with 7% having been there for over 2 years.

Official figures published for the first time in this report show that, in 2003-2004, a total of 2,798 people were held in prison for immigration-related reasons. In 2004, some two thirds of those detained were held in prison for periods of longer than 51 days. The grounds used to detain asylum seekers in prison include; people refused permission to land, applicants for asylum and people due to be deported.