Whilst racism is partly a result of fear and ignorance, the origins of racism are to be found in history. Slavery was not an invention of the middle ages – it had existed for more than a thousand years – but it started to become a more organised trade towards the end of the fourteenth century, when the Europeans began to take people from Africa against their will.

The slave trade, originally developed because of the growing demand for sugar, which lasted in Britain for about 150 years. Irish merchants were part of this trade. By the early eighteenth century, Britain was one of the richest slave trading nations in the world, with large numbers of slaves being transported from African and Asian colonies to Europe and America. 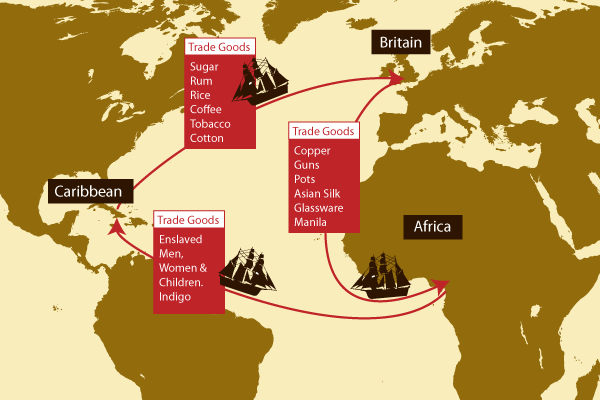 A trading system known as the “triangular trade” was created to obtain sugar and other goods. Ships left Bristol, Liverpool and London carrying textiles, gunpowder, silk and other goods. These were then traded in Africa for slaves. The slaves were taken to the Caribbean and America to work on plantations, where they were exchanged for sugar, cotton, spices and rum. These goods were then taken back to Britain and sold.

They were transported in horrific conditions often beaten and mutilated, with one in five failing to survive the journey. Those that did survive could only expect to live another 2 to 4 years, so bad were the working conditions in the plantations. Many slaves tried to escape or rebel, and even suicides were a daily occurrence.

Many people were horrified by the brutality of the slave trade and wanted to stop it. This led the people who supported it to develop theories to justify what they were doing. They claimed that some slaves had caught a rapidly spreading disease, the symptoms of which made the slaves run away! Blacks were naturally lazy, people were told, which is why they hated working on the plantation. Defenders of the slave trade also said that blacks were less intelligent than whites; they were “sub-human” and had tails. These ideas were backed by church leaders, writers and academics and soon a large number of myths about black people were spread about Europe. “The African slave in America was happier than in his own civilisation”— slavery supporter quoted in CLR James “The Black Jacobins”.

Ireland as a colonised country was subject to slavery also with over one hundred thousand transported to the West Indies in the aftermath of Cromwell’s conquest of Ireland. This legacy continues to this day, in that Irish surnames are common in the islands of the Carribean.

In 1784, Limerick became the first Irish port to attempt to promote a slave-trade company. It is doubtful whether direct Irish involvement in the slave trade was ever very substantial. Much more significant was the involvement of Irish merchants in provisioning the West Indian plantations. In fact, provisioning the Caribbean slave plantations proved to be one of the chief factors in the development of some of Ireland’s major ports. In effect, Irish merchants came to be almost as dependent on slavery as their colleagues in England, as the example of the port of Belfast reveals.