Travellers and Traveller culture have been marginalised and rejected over the centuries. There continues to be a prevailing climate affecting Travellers in Ireland today. Accepting, resourcing and celebrating Traveller identity, language, culture and heritage is a central element in any strategy to counter this situation and improve the circumstances of Travellers.

Racism at an individual level is evident when:

Racism at an institutional level is evident when:

There are a number of theories about the origins of the Irish Travelling people. One theory is that they are descendants of people who lost their land during the Irish potato famine of 1847 ; but there is quite a lot of evidence to show that their language, culture and lifestyle predate the famine by several hundred years.

Laws had already been passed in England during the 13th and 15th Centuries designed to curtail the “wandering Irish”. The word “tinker”, which means tin craft, appeared in documents as early as the 12th century and referred to travelling craftspeople who played an important role in Irish society and the Irish economy.

For a long time there was a view that Ireland did not have a problem of racism because of the homogenised state of our nation. However travellers are a minority with a distinct history in Ireland going back hundreds of years who have maintained their identity through the industrial revolution and into modern times.

The levels of deprivation, poor health and life expectancy amongst travellers in Ireland is a reflection of the problematic relationship that they have had with the state and others in Irish society. This relationship has been characterised by prejudice and has long been adversarial leading to isolation and exclusion from society for many travellers.

For more information see: www.pavepoint.ie and the
The Irish Traveller Movement

It is estimated that there is 3000 Roma living in Ireland. Many arrive here having suffered discrimination in central and eastern European countries.

For a long time the origins of the Roma people were shrouded in mystery, but through study of the spoken Romani language, which is very close to Sanskrit and to such living languages as Hindi, Punjabi, Bengali or Gujerati, we can trace the origins of the Roma to India. At the beginning of the 11th Century an army assembled from different ethnic groups within India, fought the invading forces of General Mahmud of Ghazni who wanted to push Islam eastwards into India. The army moved out of India and west in to Persia, battling Muslim forces on the way.

This was the beginnings of the Roma people, assembled from diverse groups who spoke different languages and dialects, who as they moved further and further from their land of origin, began to acquire their own ethnic identity and develop their own Romani language. The Roma arrived in the Byzantine Empire, (modern day Greece and Turkey) by c.1000 and crossed into southeast Europe in about the year 1300. 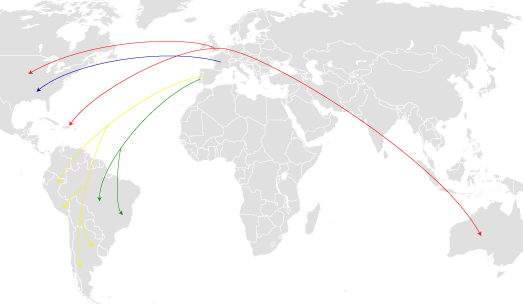 Colonies where enslaved Roma people were sent to work in the early 1800’s.

Since the arrival of the Roma in Europe, there have been many large-scale state-sponsored persecutions against them. The earliest laws against Roma were passed in Lucerne, Switzerland in 1471. Enslavement of the Roma had already taken place by this point in parts of Europe. The first recorded transaction of Roma slaves, was in Romania in 1385. Other European countries also enslaved the Roma and sent them to work in their colonies, the English sent them to Barbados, Australia and North America. The French sent many of their Roma to Louisiana in the early 19th Century, the Portuguese sent many of their Roma to Brazil and Spain deported many to South America.

Genocide of the Roma in the Holocaust

Roma were the only other population besides the Jews who were targeted for extermination on racial grounds in the Final Solution. Up to one and a half million Romani lives were lost by 1945.

Determining the number of Roma who died in the Holocaust, is not easy. Many of the murders were not recorded, since they took place in forests and fields, where the Roma were apprehended. Nobody was called to testify on behalf of the Romani victims at the Nuremburg Trials and no war crimes reparations have ever been made to the Roma as a people.

Persecution of the Roma today.

The Roma people remain one of the main victims of racism in Europe today. Many Governments still legislate against sites for the Roma and as in parts of Europe in earlier times a policy of trying to get travellers to give up a mobile life and remain sedentary is still enforced by some countries. Roma are still targeted for racial violence throughout Europe as prejudice and stereotypes about the Roma, as a people are still prevalent. Today neo-Nazi activity in Europe makes the Roma its prime target of racial violence.